Would you like find out a little more about Laughing Crow?

I'm often asked about the slanted end that has become sort of a trade mark for Laughing Crow Flutes. People want to know if it affects the sound. It is my opinion that the tone is affected only in a minimal way. It does not degrade the sound of the flute as far as I can tell. The slanted end just makes it look different and in my eyes gives a certain "flow" to the shape of the instrument. Now, it has been brought to my attention by one of my friends that it is possible to get another note out of the flute by bringing the flute down to your body, or your knee if you're sitting, while all fingers are down playing the fundamental. This technique helps add to the palette of notes that you can use while playing. So, long story short, the slanted end is advantageous if you wish to learn how to play another note that is 1/2 step lower than the fundamental. If you thought your F#m flute could only go as low as F#, now you can get one more note lower by bringing the open, slanted end down towards your body and get the F natural. Same with the other keyed flutes, IE: a Gm flute can play the lower F#, an Am flute can play the lower Ab, etc. This extra note is often referred to as the "leading tone" or the "major seventh".

The terms "Native American Flute" and "Indian Flute" are used to describe the style of flutes and music that I create. It does not imply that the flute and/or music is made by a member of a Native American tribe. Actually, I am, as most of you are, a "Native American". This is due to the fact that I, like so many of you, was actually born in America. I also have Cherokee blood in my ancestry. However, as a non "card carrying Indian", in order to comply with mandates set down by The Department of the Interior I have included this disclaimer.

Just finished a batch of Artisan Flutes July 26, 2018 along with a bunch of other outstanding orders. Take a look if you have a moment. Thanks!

Laughing Crow Flutes owned by Richard Maynard offers professional quality flutes and personal approach to customers. I bought a Drone Flute in Key of Low Dm made with Eastern Cedar. When I opened the package, I was stunned by the beauty of this flute... a work of art. I’m a relatively new Native American flute player who prefers low tones. I couldn't’t ask for more in this flute with its deep tones. In addition, Richard is very personable and great to work with. His focus is not mass production; rather he produces works of art and sound.

I drove into town this morning and picked up the F#m Bird's Eye Maple Drone at the Post Office. It is a beautiful work of art, I am very impressed.

It is visually stunning, thank you for the careful choice of the wood, but the tone is everything I had hoped for and more, just magical. I am playing a wedding in 3 weeks and

I know everyone will love the tone from this beautiful work of art.

Thank you for all you do, I am privileged to share the gift.
Blessings,
John Roach

Joyce and I are "Windsong Canyon"- ( on Facebook ) NA Flutes and world percussion, guitar, mandolin and Joyce sings. I got my best flutes from in 2009 - E minor drone and F# m Tiger Maple w/Purple Heart, Padauk. I now have over 25 flutes and perform in some great venues! Those 2 flutes ( and a triple F# from Pat Haran ) are still by far my best flutes !! I just ordered your Paduak F# - the sound bite is super for a very moderately priced flute. We perform at the So Cal RenFaire, Labyrinth Masquerade Ball at the Biltmore in LA, RSA Botanic Gardens, Storrier Stearns Japanese Gardens in Pasadena, various farmers markets, and I was just asked to play for a new TV series, "American Princess," coming out in the Fall. Your flutes primarily made all this possible!!! The little recording I have done has worked best with your flutes. You are the master flute maker and I am so very happy to have your flutes! All the very best in life to you and family ,

A bit about myself and the flutes...

The flutes by Laughing Crow in the style of the Native American Indian flute or love flute are traditional musical instruments. My instruments are not mass produced. These Native American styled flutes are created by a musician (me), for the musician (you) in my workshop in Tucson, Arizona. Of course, you don't have to be a musician to make beautiful "noise" with the Native American Flute! The Indian Flute is easy to play and rewarding to learn. It is the easiest of all musical instruments to learn. All of the flutes shown are handmade. That's right. I'm just one guy doing all the tasks with some occasional help from a skilled assistant. I leave the mass production, laser, CNC machines (computer numerically controlled), imported labor, dyes and stains to the big manufacturers. Each piece of wood is selectively chosen, cut to shape, tuned and finished by master flute maker, Richard Maynard, creating an outstanding, affordable custom instrument you can enjoy for a lifetime. The flutes made in the style of Indian Flutes  by Laughing Crow are easy to play, have a big voice and are very forgiving to the novice as well as being great performers for the experienced player. My flutes have a wide dynamic range. Whether one wishes to play softly and in a meditative style or if one wishes to play "out" for an audience, these flutes will perform for you. I'm confident that if you purchase one of my flutes, you'll not only be very happy with the appearance, but even more so you'll be thrilled with the tone, playability and tuning. If there is ever an issue with any purchase from Laughing Crow Flutes, rest assured that it will be resolved fairly, equitably and quickly. You have my personal guarantee on that..

A few photos of L.C. at work along with a nice rack of Native American Style Flutes

Making a square stick round prior to the drilling process where the blank is hollowed out into a tube.

Out in front of the workshop routing two piece blanks quite a few years ago. Nowadays almost all the single flutes are one piece. Only the Drones and the large Bass Flutes are done in two pieces. 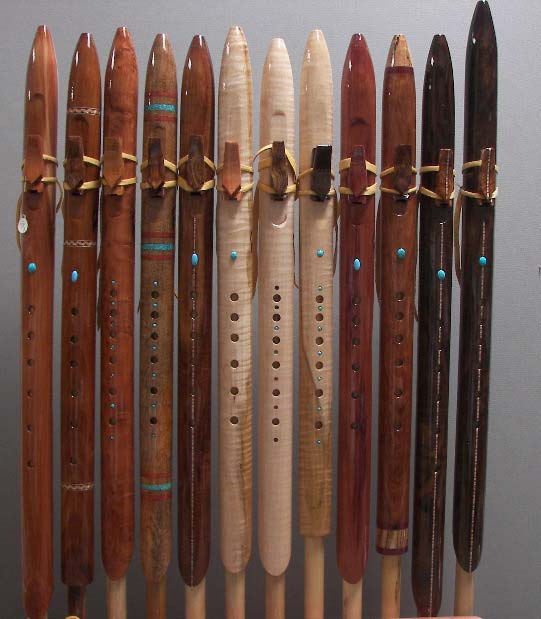 You're looking at several week's work in this rack.